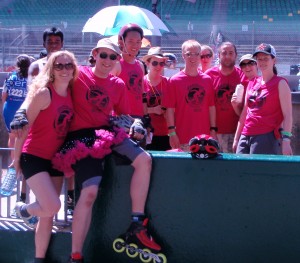 After an eight year absence, Skatefresh returned to the famous Le Mans Ducati race circuit, fronted by Matty and myself to compete in the 24 hours skate race that is now a highlight of the skating calendar. Our team of instructors (Matty, Jason, Asha), dedicated students (Matt B, Caitlin, Min Zaw, Alison, Hazel, Dinesh) and veteran friends (Steph and Miles) alongside our pit crew of Matty’s Tracey, was a disperate group of individuals many of whom didn’t know each other before arriving at Le Mans, and who ended up forming a tight group based on this shared experience. Le Mans can only be described as intense (in every sense of the word) and from leaving London there is constant movement, decision making and cooperation needed for all aspects to ‘work’. Suddenly were are all part of a team and all reliant on each other and pulling in the same direction. This feeling is something I loved to observe, be part of and to help manifest.

Even before the race kicked off at 4pm on Saturday 25th June we started ’being’ a team, on the journey, at the campsite and track side. Walking up the tower to get into the grandstand to watch Matt B do our start, I felt a huge sense of occasion and excitement, knowing that baton wouldn’t stop doing laps of that track for 24 hours. The weather was hot, too hot to be standing around on tarmac and skating in the sun, but with suncream on overdrive and our trusty pit crew umbrella we all faced the task at hand. 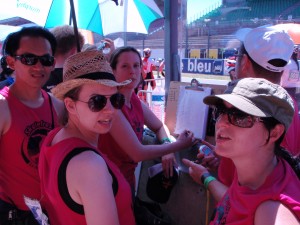 I loved hearing everyone’s experiences of their laps, how awful the hill felt (and what tactics we were using to get up it faster) and also how all our newbies to Le Mans dealt with the massive down hill corner, which gives skaters their first opportunity to deal with seriously high speed which isn’t possible in London due to lack of large hills which don’t have traffic or surface as a consideration. 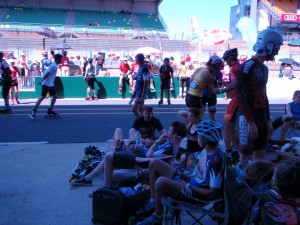 I applauded the progressions of each skater who conquered their fears, lap by lap and reduced their braking, until finally they saw that downhill as opportunity to skate into it and have the roll of their lives, confident in their ability now to hold it together, control the speed wobble, steer their edges and remain in a tuck as long as possible. This is how Le Mans makes you a better skater.

I was happy with my new 90mm wheel set up and glad that I had listened to Matty’s suggestion on this. I will be keeping that new frame permanently. I wasn’t expecting to enjoy the actual skating so much and often found myself completely in the flow, mesmerised by the sound of the wheels on the hot tarmac, focussed on my breath and finding the best line through the skaters ahead of me, 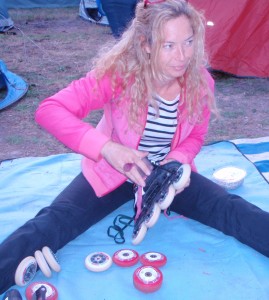 feeling at one with my skates, taped in and tuned into the flow. There was a huge sense of freedom in just trying to go fast and not having to concern yourself with irregularities of surface or the possibility of vehicles/pedestrians/other skaters needing to be dealt with. I never have the chance to skate really fast without there being a sense of tension regarding having to stop suddenly or make decisions at high speeds. I felt true joy and connection in that freedom of pushing, feeling and gliding, it’s almost magic.

I looked after my team by cooking three meals throughout the race, ensuring everyone ate ‘real’ food and didn’t overdose on electrolytes, cereal sports bars and chemicals/sugar. 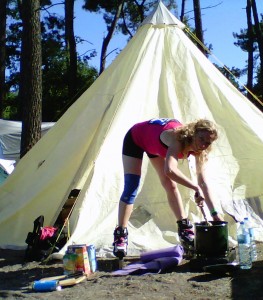 I made Quinoa with Japanese vegetable curry for before the race, then Miso soup with seaweed, veg and noodles for Saturday night and a deluxe porridge on Sunday with stewed fruit, nuts, seeds, raisins, dates and honey. I know my team appreciated my efforts and enjoyed the food and that was all I needed to make it worthwhile.

The night shift for my group was from 8pm – 1am and for Matty’s group from 1am – 6am. The evening provided some respite from the hot afternoon but the calm conditions started to change and the wind increased. I was astonished to be hanging around on the night shift not needing to cover up, enjoying the balmy night temperatures, knowing that the next morning shift would be a tester after little sleep and soaring heat. As Sunday went on the pit box shade disappeared and temperatures soared to 35+. Tactics talk was now about how to avoid severe dry mouth syndrome and how to avoid suncream dripping into your eyes. I was impressed by our team’s efforts on the stop watches. I even overcame my stop watch phobia and enjoyed the anticipation of waiting for people to return, watching the change overs and organising the next skater and feeling like the pulse keeper. Not one lap time was missed.

It was wonderful for the Skatefresh team to feel part of the London/UK skate crew of 10 teams. Particular mention must be made to the valiant efforts and achievements of the two soloists Ben and Rick (doing the unthinkable and skating 24 hours solo), and also the 2 Duo teams of Richard and George, Sparky and Quaddie. I was utterly astonished as I watched them regularly pass the pit boxes and look so fresh and unhaggered. I cannot contemplate coming into the home straight, skating past all the boxes and not handing over to one of my team mates but having to head up that hill again. My deepest respect and admiration goes out to all those guys. You are an inspiration. The LondonSkaters endurance team of 5 people also impressed me and I am deeply proud of all the podium placed teams. 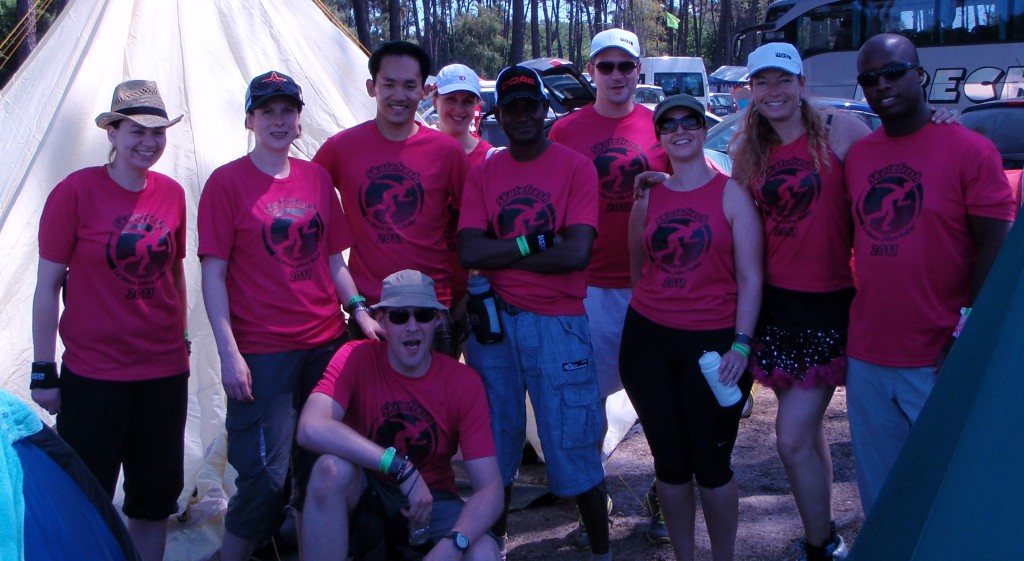 I was interested to know what a backwards lap would feel like (I don’t think I’ve ever had the possibility of skating nearly 4km backwards, ever. For safety reasons I decided to do the first up hill and downhill forwards (as due to me looking over my right shoulder when backwards, I’d be blind to the curve), but I transitioned to backwards after the downhill and remained there for the rest of the lap. I had a video camera on and I wanted to catch skaters faces from the front as they passed me and hoped to find some London skaters to film. I stayed out of the fastest speed line and filmed the super fast speed skaters as they flew past me (many giving me friendly nods or thumbs up, acknowledging my backwards efforts). I discovered that I favour my left leg (weight wise) as it was getting rather tired by the time I got to the water station and this forced me to start using my right leg more which as I did created more speed and an ‘ah haaa’ moment as I realised I also do what my students do (favour my favourite leg).

I saw the race judges on their motorbike coming up behind me and worried for a moment that my backwards skating might be frowned upon (even though I was being careful not to be in the way) but I was very surprised to see them go by me and the guy on the back applaud me with a clear “tres bien, tres bien”. I think the only other person to do some backwards on the course was Min Zaw who used the straight sections to work his transitions and get some uninterrupted practice (of which there is video evidence).

Le Mans isn’t simply about the skating however. It is a great opportunity to meet new people (many of whom have been faces on street skates for years for example) or to 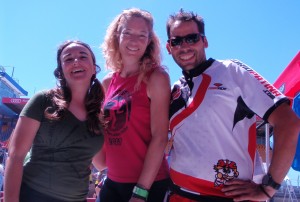 deepen existing friendships, with trackside chats, campsite socialising and traveling en mass. You get to push your own boundaries and we were all tested to the max with a combination of physical tiredness, lack of sleep, excessive heat and sun exposure, intense sharing of space (be it tents, campsite, trackside, pit box, trains). But this intensity pulls out of us something pure and real, the unedited versions of ourselves which we often leave unexpressed. 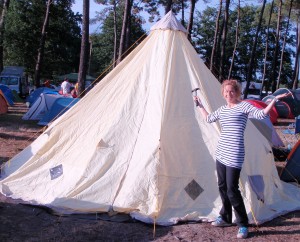 I am left with a feeling of pride for everyone on my team, many of whom I taught how to skate, either from the beginning or part way through their process. Seeing them skate Le Mans is like the icing on the cake for a me. Having Matt as team leader was a blessing and sharing responsibilities with him felt like a natural partnership. Months ago we were planning our ‘Mash Up’ training sessions and here we all were doing it. The future had become the present.