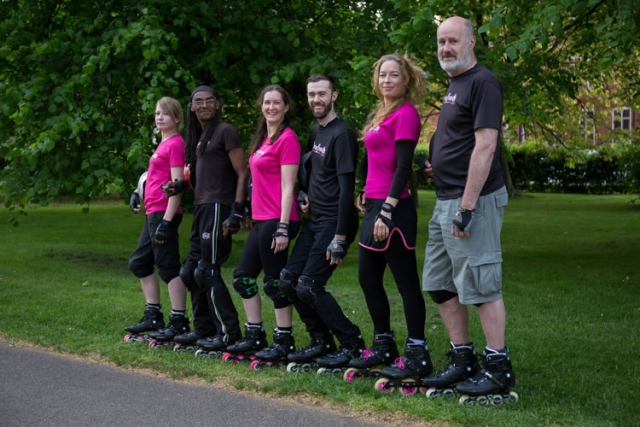 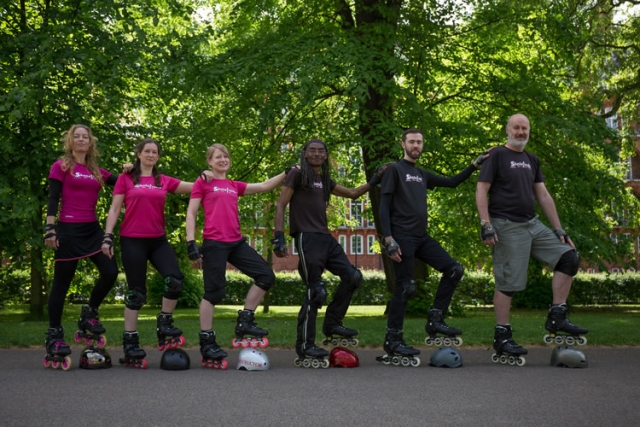 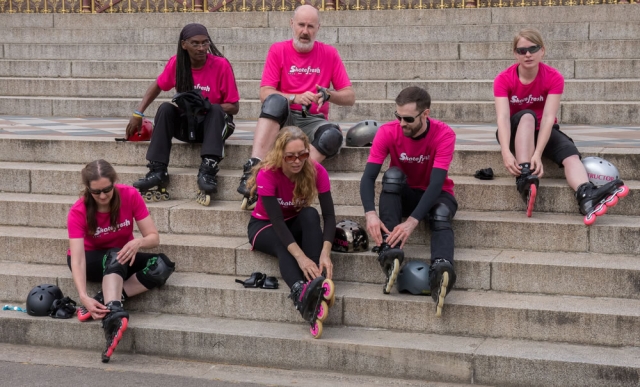 Skatefresh is an International Online Professional Teaching Academy, with a unique Teaching Strategy.
We provide a “Hub” for all skaters to gain Professional Tuition in the Art of Skating so you have an experience that is Fun, Progressive, Safe and Enjoyable, right from the start.

Skatefresh is a Skate School of 2 halves;

– UK Classes in London and Brighton

If you learn properly and skate well, you won’t learn by falling, you’ll feel relaxed and alive and in control of your skates. The feeling of exhilaration is unavoidable when you learn safely and have a Training Plan to follow.

Asha discovered her first pair of skates in a street rubbish bin and went on to be a champion figure skater on Quads in her teens. She represented GB several times in competition and learned classic technique and discipline, essential for top level skating.
In 1999 Asha started Skatefresh, London’s longest running skate school.
Asha has been Training and Certifying Instructors worldwide since 2003 with ICP (Inline Certification Program) and is their most active Examiner. All Skatefresh Instructors in the UK are certified with ICP.

Asha and her Team of Instructors are PASSIONATE about skating, because we know first hand the joy, good feelings and connectedness it gives us.
Skating Well makes us Feel Alive with Freedom and Good Health.
Skating Well is not instinctive or intuitive so most skaters need to learn the correct positions and nuances of weight and body control, such of which is super subtle.

Each skate move (be it a stride, a stop, a turn or a trick) is made up of several different sections in sequence. Your body has various moving parts you need to control in order to skate that manoeuvre.
This complex mix needs to be learned in careful sequence so the body can acquire each part separately before then being blended with other parts to create the whole move.
So much Instruction ‘out there’ simply demo’s the move and describes what’s happening.
Asha’s methodology comes from 17 years of actually teaching skills to real skaters and having to invent exercise after exercise to achieve the different parts to create the whole.
We’ve done all this with skaters aged 4 – 83 years old.
If they did it, so can you!
If you follow Asha’s progressive exercise sequences which are the trademark of her work, you WILL reach your goals.

The founder & owner of Skatefresh, Asha has been skating for over 30 years, ever since discovering a pair of quad skates in a rubbish bin at the age of 10.
It was a life-changing moment for her, and being on wheels soon became second nature. She was spotted by a figure-skating coach and went on to become the British Novice Artistic Roller Skating Champion at the age of 12, and as a teenager represented the UK in International Artistic Roller Skating Championships.

In 2000 Asha set up Skatefresh, London’s longest-running skate school and one of the first in the UK. She has been a committed, full-time instructor ever since, running classes for all levels of skaters, as well as street skate classes, kids’ clubs and bespoke dance and fitness groups.

For over ten years Asha has trained and certified new and existing instructors for the Inline Certification Programme (ICP) in the UK, Slovenia, Spain and Brazil. She has certified hundreds of instructors.

In 2015 Asha was Head of Coaching on Disney’s new teen Drama “Soy Luna” in Argentina and continued via video coaching throughout the year. In 2009 Asha starred as a coach and judge on the BBC television series Skate Nation.
Asha is fluent in Spanish and Portuguese. Asha keeps fit and healthy by practicing Yoga, eating healthily and of course skating.

What Asha’s students say about her:

“I can’t believe how you managed to teach me the inverted mohawk in less than one hour and in the dark. Sarah seems to have jumped up a notch too, as she was rolling in Toe Roll position for some distance unaided and her speed seems to have doubled since she took the Improvers class.” – Michael, 55

“The lesson we did before the street skate was spot-on. you addressed many useful things. During the street skate, I felt completely in the zone. Thinking about it makes me smile and feel very proud. Thank you ever so much for being a great teacher.” – Simon, 32

“Thanks for the two lessons this weekend. A great help. Very much appreciated. You are a remarkably competent and an exceptionally talented teacher.” – Daniel, 55

Nick – Skatefresh InstructorI’ve been skating for 12 years now, on inlines and quads. After a lifetime of carefully avoiding sport or, let’s face it, exercise of any kind I was, I must admit a fairly unlikely candidate. But better late than never, and thousands of miles later I’m still doing it and still having fun so, if you too have a hankering for some wheels under your feet, then do come and join me. If I can do it, so can you! On my personal skating journey I’ve felt inspired enough to have a go at most things – skate marathons, speed skating, ramps and skate parks, roller disco, ice hockey and slalom, and I’ve enjoyed all of them immensely, despite that natural inclination toward the sofa and the central heating. Skating is a liberating and exciting activity that pretty much anyone can do and, with practice, even excel at. It’s also a terrifically inclusive social activity – skaters are a pretty friendly bunch as I’ve discovered not only in the parks and streets of London, but also in France, Germany, Holland, Spain and the USA. not forgetting Brighton and Eastbourne of course! I particularly enjoy teaching beginners, and, once you’ve mastered the basics of rolling, stopping and turning on your inlines or roller skates, you’ll soon be zooming around with the best of them. I look forward to meeting you.

What clients say about Nick:
“We had our lesson yesterday with Nick, and just want to thank him for being so lovely and patient with me and my friend. We were absolutely rubbish, but he was so nice, and calm with us and made the experience one that we will always remember.” – Sophie, 35

Who? Adults and children
Where? Hyde Park
When? Mid week and weekends
What? Teaches quads, inlines, private lessons.

Not being as young as I’d like to be does not stop me from skating, and has not stopped me from becoming a skate instructor for Skatefresh.
It is perhaps my passion for skating and music that led me to spending six years of my skate career as a roller disco marshal. Nothing combines the two like this 80’s phenomenon. I have also spent four of my years on wheels as a skate coach and captained the GB team in the 2011 Roll Ball in India. Last year I started teaching some of Skatefresh’s school projects where we got kids to skate safely. In the coming skate season I will be teaching private lessons as well as take on some beginner classes so I can share my passion of skating with our students.
On a more personal note, I like good food and good company but severely dislike the lack of places for us to skate in London.

Comments from a parent of an 11 yr old child:
“What an incredible instructor! Hugh was polite, kind, friendly, extremely professional and definitely on a child’s level. Sasha loved him and has leaned many new skills. The lesson was well structured and covered so much – more than we could ever have hoped for.”

One unseasonably warm Spring day in 2012, I turned up to my very first inline skating lesson, having decided less than 12 hours before to attend after searching for an alternative to the gym.

After the lesson was over, tired, aching and sweaty, I decided that I loved the sport. Purchasing my first pair of inline skates, I set myself the goal of joining a Skatefresh trip to Paris. I will always remember the Paris Friday Night Skate with several thousand fellow skaters, skating over 20 miles just two months after my first lesson!

Since then my passion for skating has seen me attending additional classes to brush up on skills, learning to skate backwards and generally wanting to know more, and deciding I wanted to become an instructor. I have now been skating for over four years and have been a qualified instructor for over a year. I enjoy passing on my passion to students, helping them to gain confidence on their skates and exceed their expectations.

Now I use skating to commute to work, travel around London and other cities; participating in several different skating events including the Berlin inline skating marathon. I love being out and about in London on my skates and find that it helps clear my mind, allowing me to be present in the moment. I regularly attend group street skates in London, and am involved in the sound crew who entertain the skaters with a mobile backpack sound system. I enjoy the variety of people in the group skates, meeting people of many different ages and backgrounds and the non-skaters that join in. Skaters are an open and inclusive bunch.

I learnt to skate on quads as a child but never progressed much further than going up and down the garden path. I rediscovered skating in 2011 when my children begged, pleaded and persuaded me to take them to the local roller disco with their friends. After half an hour of having my feet run over by my youngest, who was doing great impressions of Bambi on ice, I finally hired skates for myself if only to save my toes from further torture. The rest, as they say, is history!

I quickly wanted to do more than going in circles with the kids so I searched for a local skate instructor and found Asha and Skatefresh online. I booked a couple of private lessons for myself for my birthday and was soon able to join Brighton Skate for their summer street skating season and truly fell in love with skating. Over the next year I tried every opportunity that presented itself: slalom, speed slalom, ice skating and speed skating. For my birthday the following year I celebrated by being part of the 2012 Skatefresh Le Mans 24 Hour Roller team.

Having thought about teaching skating for a couple of years, and having taught the basics to many of my kids’ friends, I finally booked onto the ICP level 1 at the beginning of 2015. After skating with Asha from my first shaky heel brake stops, to more recently attempting grapevine leading with my “other” side, I am now extremely proud to be wearing pink and being able to pass on the joy I get from skating.

I will be teaching Kids club in Brighton and Hove (and eventually in Lewes if I can just find the right bit of tarmac for the job!)