Liam Andrews from Belfast uses Asha’s Online Courses to help him develop his skating skills. Here he recalls the moment he received a ‘Pink’ gift from his family on his 70th Birthday…

“Not so long ago my two daughters organised a surprise birthday party for my 70th. I was having a great time in the best of company in the middle of multilingual mayhem when I was given a pink postcard. It said ‘Happy Birthday’ in Irish at the top and below was this amazing image of a leaping woman whose ensemble consisted of wrist guards, skates, dark glasses and a complete papal outfit. Surreal as the whole thing may have appeared, it slowly dawned on me that this could be nobody else but Asha. Nevertheless, I couldn’t quite figure out why she was dressed up like the Pope. 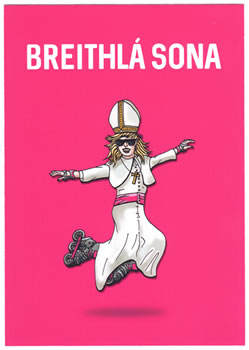 I flipped the card over and, as I read the text on the other side, My daughters gave me the background.

When they were trying to decide what they might do for my 70th birthday, they recalled a humorous conversation they had had with me about skating.

I had mentioned that it was common practice among devout Irish Catholics to make a pilgrimage to Rome to see the Pope but that, given the choice, I would rather meet Asha instead. I was trying to make a serious point which they accepted with much laughter. It was that certain institutions, like the papacy or the monarchy, make insignificant people famous, but that the rest of us if we become famous at all, do so entirely through our own efforts. For that reason, I argued, Asha was much more deserving of a visit than the Pope.

I thought nothing more about it afterwards until my daughters began their explanation. I was shocked, astonished and amused all at the same time. I was to meet ‘Pope Asha’! What a surprise! I’m glad I didn’t tell them about the three musketeers of skating – Asha Kirkby, Naomi Grigg and Anne Marie Waugh. God knows what they might have cooked up then.

I’m really looking forward to meeting Asha when she returns from her travels. I’ll have a two-hour skating lesson with her and then join the Intensive Group class on the following day for more of the same. Roll on Summer!”.

– Liam Andrews is a member of Belfast’s Irish-language community. He and his wife raised their daughters trilingually, speaking Irish, Welsh and English. Over the years he has been active in the successful campaign to bring the Irish language into the mainstream of everyday life in Northern Ireland. On retirement, he took up skating as a radical alternative to the monotony of swimming and walking. His first lesson was in Glasgow with Don Morton at Tryskating.com. Since then he has combined lessons in Glasgow with online tuition from Asha.