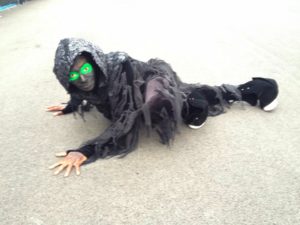 On the 27th of July 2012, 47 skaters including myself took part in the opening ceremony of the Olympic Games. The majority of the skaters were volunteers, we were coached by a great team of professionals, who were ex members of Starlight Express. The skaters were selected after passing an initial audition, this was towards the end of March 2012.

Our rehearsals took place at three sites, 3 Mills studios in east London, Dagenham East London, this was an open air site, and the Olympic stadium for the last few rehearsals, costumes and make-up.

The section we took part in was during the NHS section, we were the De mentors, part of Voldemort’s crew, our group skated in front of Her Majesty.

My skate family has grown, the love and enthusiasm from all of the people who were involved in all aspects of delivering this extravaganza was fantastic.

I met and worked with people from all over the U.K. surely this is the purpose of sport…to bring us all together in a spirit of co-operation, look at what we achieved.

Hugh is one of Skatefresh’s instructor and will be attending the Skatefresh Birthday party this Saturday 11th August in Brighton. Your chance to meet him and have him tell you more about his Olympic skating experience…