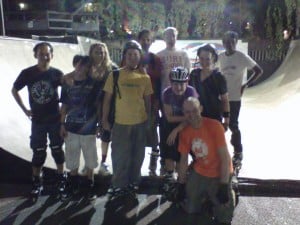 Having discovered at the weekend that most of the Skatefresh Le Mans crew are now hanging out at the Bay66 skate park in Portobello (and even buying new aggressive skates), I decided I had to check it out, especially as I’m spending 2 weeks in London due to other mid week skate projects. Taking people out of context is interesting as I didn’t even recognise Hazel, Min Zaw or Matt B on the small half pipe as I walked in. Warming up on the middle sized ramp felt oddly familiar although I’ve not touched a concave surface for over 6 years and even then for a total of 3 sessions I think. With my 90mm speed wheels on I was picking up speed alarmingly fast and needed to hear instructor Matt’s obvious guidance of ‘stop pumping Ash’ in order to slow down and stop! Getting into the 180 transitions was more scary almost until later on in the night Matt again managed to give me the essential ‘your knees aren’t bent enough Ash’. Go figure!

However the highlights of the night were multiple. Amazement at Matt B’s first outing on ramps (obviously previous board and bike experience helps) but his recoveries were inspired as well as entertaining.

Watching Min Zaw analyse the 180 transitions into backwards off the boxes and then nail them each time faster and with more confidence was inspiring. Seeing learning happening that quickly is such a buzz. By the end of the night the big descent was his, and backwards of course! Amazing.

I loved seeing Skatefresh instructors Matt and Jo enjoying their skating and both getting some air under those wheels. After teaching Skatefresh’s kids camp all morning (and continuing everyday this week) Jo didn’t seem to be lacking any energy and her smile was another highlight.

Feeling proud of any personal accomplishments piled into insignificance watching Blue Room’s David jump and slide and rotate across the course with the smoothness and grace of I don’t know what. Watching mastery of anything is so humbling and uplifting and motivating. My favourite moment of his skating may seem like a nothing trick, but it was his entry into the super steep curved ramps when he did it with a run up and jumped into it, avoiding the curved surface and basically flying for several metres before hitting the ramp so silently and smoothly you almost missed the fact he’d been airborne. Beautiful. If it wasn’t for that I wouldn’t have had the courage to try that ramp. I resisted the urge to over think and allow the fear to hang around. Breathing slowly helped and the feeling was divine!

I was super proud of Djuaan (my boyfriend’s 13yr old son) who also came along and tackled the ramps for the first time. Skating behind him as he followed Hazel through the skatelondon bladercross course was so much fun.

I will be remembering that night for some time, mainly because it was such fun but partly because any time I move my right leg my bum cheek/upper thigh gives me a sharp reminder of pain that feels exactly like the pain sustained from learning the double axel as a teenager. Sod the arnica, its time for the rubber ring to sit on again!