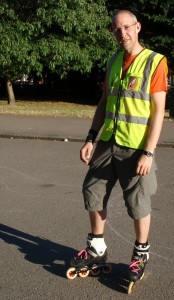 So there you go then, first a trip to Les Mans, then a revitalisation of personal skating interest, then street skating AND THEN: Marshalling !!!!! Hell yeah!!!!! For many years I’ve wanted to give marshalling on the weekly Street Skates a go; post Les Mans I felt inspired to give it a try. So Wednesday 7th July saw me heading out in a yellow vest for the first time. I was told to shadow Ed and do as suggested by him and try not to lag behind (he’s quite fast). There were loads of us and the route, for a change, was heading north from the park which meant my baptism of fire was to be part of keeping the unruly masses in one lane as we progressed up Park Lane to Marble Arch and then up Edgeware Road.  Really quickly I felt the limits of my ability: I couldn’t look behind me over my left shoulder only my right. I instantly had Asha’s voice in my ears: “Work on both sides, do more on your bad side.” Street skating shows up flaws really quickly and forces improvements in skating ability where just rolling around the park just doesn’t.

I then discovered why marshalling is so cool: an empty road. Oh my god! An empty public road to skate on and you’re positively encouraged to go fast… Wicked!!! Proper fun!!  So this is how it works: you block the road until the skate pack passes, then you overtake the skate and block another, unless something else happens, like stray Taxi’s or maybe a tight bit of road with oncoming vehicles in the way. Basically you skate quickly with your eyes open, try not to have to shout “LEFT!!!!” to the peeps doing the street skate too often and either block the traffic or wait to block the traffic until the skate catches you up.

So we wended our way round and about to Ladbroke Grove for half time.

In the space of 45 minutes moving, I learnt about blocking roads, controlling the

speed of oncoming cars in tight sections, when to block oncoming traffic, not looking stupid and blocking one way streets needlessly, when to stay with the pack and how most of the marshals don’t know where they’re going either. At half time I went back to Sparky (the man in charge) to see how I’d done. I was very pleased to find out that he was happy. Let’s be honest if the boss is happy first day on the job that’s a good thing? Right?

The skate then moved on through north(ish) London, I sat very closely with some of the other marshals and whilst consistently getting confused about which way we might be going, I had a great time. It’s really good fun and giving something back to London skating feels great. I did nearly ‘floor’ a poor girl on Kensington Gore, she literally just steered out to the right of the skate in front of me. I was left a choice of oncoming London traffic or hitting her. I opted for her – frankly more attractive than a bus – I hit her square in the back with my outstretched arms then held her up so we matched speed and she didn’t fall. She screamed and screamed, but once she’d worked out she wasn’t falling smiled and said thank you.  A nice end to a decent evening of skating.