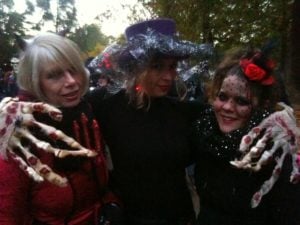 When there are a good 200 zombies, bloody nurses and their doctors and mushed up faces on skates on Serpentine Road you know it’s time for one of the biggest events in the London skate world. The gruesome Halloween Skate.

Everyone tends to meet up with plenty of time for some grueling meeting and greeting. Skaters try and take as many pictures of each other in well, unusual, skate gear. This most fun activity may however be hampered severely with some of the more out there props (see: Asha’s plastic hands).

And off this rolling parade went from Hyde Park towards Victoria with London’s pedestrians whipping out their iPhones to film it. The talk of course was all skateable costume. For this occasion it needs to be both perfectly horrifying but keep you warm and preferably not trip you up. Capes, though looking flash have the unfortunate effect of covering up the street for the skater behind, thereby hiding those nasty potholes, and uneven surfaces that can make you go flying. Also slightly on the dodgy side are lose bits and bobs covering your skates, fake monster feet, twinkly spider lights from the pound shop. All need to be attached with care so as to not trip you up.

Much advised on the other hand are layers, lots of them. Lots! The females of the attending Skatefreshers counted 7 pairs of tights among them and sported 9 tops. And there was only 2 of them, Asha and Fab! 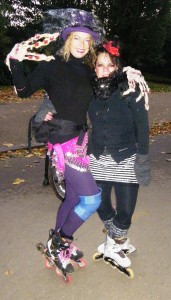 Asha of course boogying at the front of all the gore on wheels enjoying her first Street Skate in months. And her trusted PA Fab on her first Street Skate ever, just happy to toddle along in a straight line without bumping into Jimmy Saville or the child snatcher with Justin Bieber in his cage (brilliant costume Sparky!)

And then halfway to the halfway break it started raining. Ignorable at first, but not for long and as the fake blood on faces started to slowly trickle down cheeks and dropping from lips it became clear that this Street Skate was not to be.

Everyone did power on to good old Lord Nelson at his Trafalgar Square home, but that was that. The roads had become too slippery and no one wanted to turn a fake casualty into a real one.

So off to the pub at Kings Cross we went. Some on the Tube, some brave souls on skates, and some of us on the bus. Which proved to be an option as tricky as wet tarmac as the bus driver’s order to take your skates of sounds easier than it looks. You try taking skates off in a packed double decker standing by the door which, this being a bus, opens regularly while getting your sequined skirt tangled with the fishnet tights of the skater next to you. It’s entertaining, at least for everyone already in shoes.

But everyone made it, smudged blood, fake hands and all. Skates and their owners didn’t take very long to transfer this years boozer into the perfect finale for an unfortunately short skate. All is well when there are 201 pairs of skate are parked along every wall and most of the London skate scene is dancing around them.

It was great catching up with everyone (though not always easy to identify the creature in front of you as an old friend), meeting new skaters (though again, could have been people you already know, just didn’t realise it) and simply being among skaters. You can’t go wrong. This is the part Skatefresh likes the best. Happy Halloween everyone. 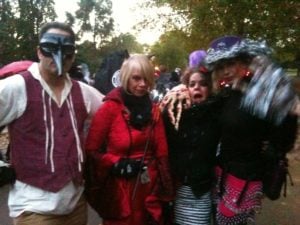