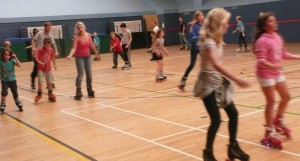 The speakers announce that Dizzee Rascal only cares about sex and violence and Rihanna would fancy getting it on with a rude boy. Some people already sway awkwardly back and forth, their balance a cause for concern. Others are still happily boogying around in circles in the bright light venue. The party is rolling along, it’s four o’clock …. in the afternoon that is. Welcome to the fun that is a roller disco! 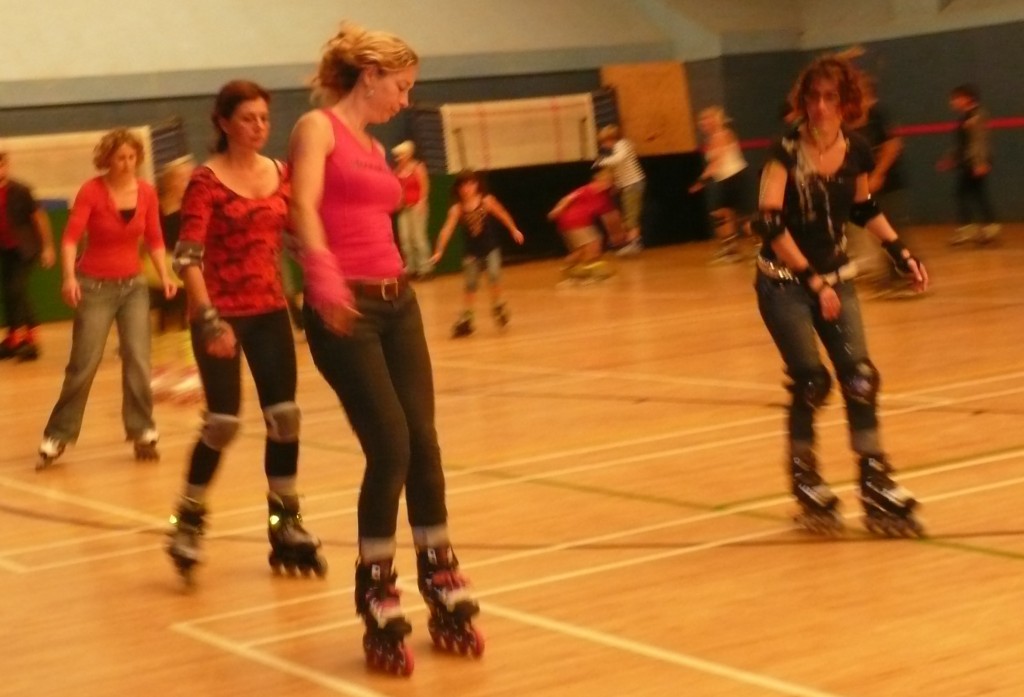 Traces of the 80s have made it to Brighton’s King Albert today. The music has changed, but the quads and the colorful leggings and tutus are the same. The people going round and round are of all ages and the level of skill is about as varied. Some mothers hold on to the walls for support and inch their way forward, while some daring kids well under the age of 10 whizz past a at a dizzying speed. A bunch of more experienced skaters (mostly skateguards) show off twirls and rhythmic moves. The indoor floor allows for smooth skating and more importantly the weather can’t interrupt the flow.

Unlike when Asha tried to teach her Skatefresh classes on Brighton’s seafront earlier that day. Setting out for a day of skating her workday got cut short by a rain shower that did England’s weather reputation proud. So the skill session was simply transferred to the above roller disco. Those who had come along (Kristin, Katja, Mariella and Pam) got to learn simple forwards cross-unders (not really that simple), heel-roll and toe-roll combos, scissor leg swings and see-saws and got to put them into action right away.While Asha went off moon-walking around the track the girls honed their new tricks.

Britney declaring  (and a bunch of tutu wearing 12 year old girls singing their agreement) that whips and chains excite her was the cue to move on. Not home, 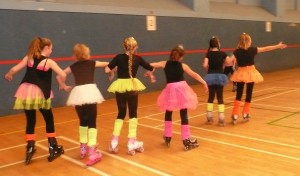 not to the pub, but to Shoreham to roller disco number 2. GYSO (Get Your Skates On), the guys responsible for the event above have a bigger, better, worse lit venue in an old Royal Mail building in Shoreham to let the fun continue. The sing-along play list was much the same, 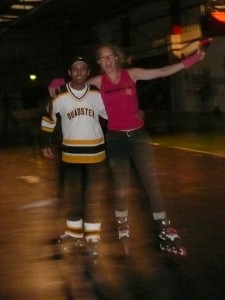 but the floor allowed for much more freedom of moving. Asha and Paul Quadster got their groove on for real now and were dancing away with all sorts of impressive leg work in the middle of the rink.

The afternoon/evening proofed exhausting in the best possible way. The skates loved the indoor surface and we all simply enjoyed a good bit of rhythmical rolling… Definitely an afternoon (no matter the weather) to be done again (maybe one Disco would do) and again and again. Bring your kids, your mates and your groove and we promise you’ll feel like Olivia Newton John in Zanadu…