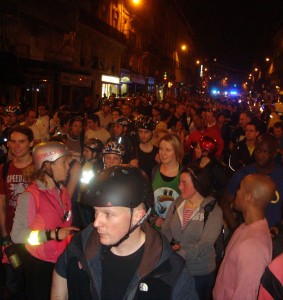 After weeks and weeks of rainy, miserable weather in London we all needed some sunshine for the Skatefresh Paris trip – and we got it! The dark clouds and rain of Friday afternoon disappeared and everything was dry for the epic

27km marathon of fabulously smooth wide boulevards. There were a few long uphills but it felt to me like there were more descents and the adrenalin filled smiles on everyone’s faces after 20 minutes told me everyone was enjoying the challenge. Some rolling first aid was needed after Bastille’s hideous cobbles claimed a few casualties. The sense of achievement at the end of it all was palpable and I know everyone’s skating improved as a consequence. What a way for Beth to spend her birthday evening. 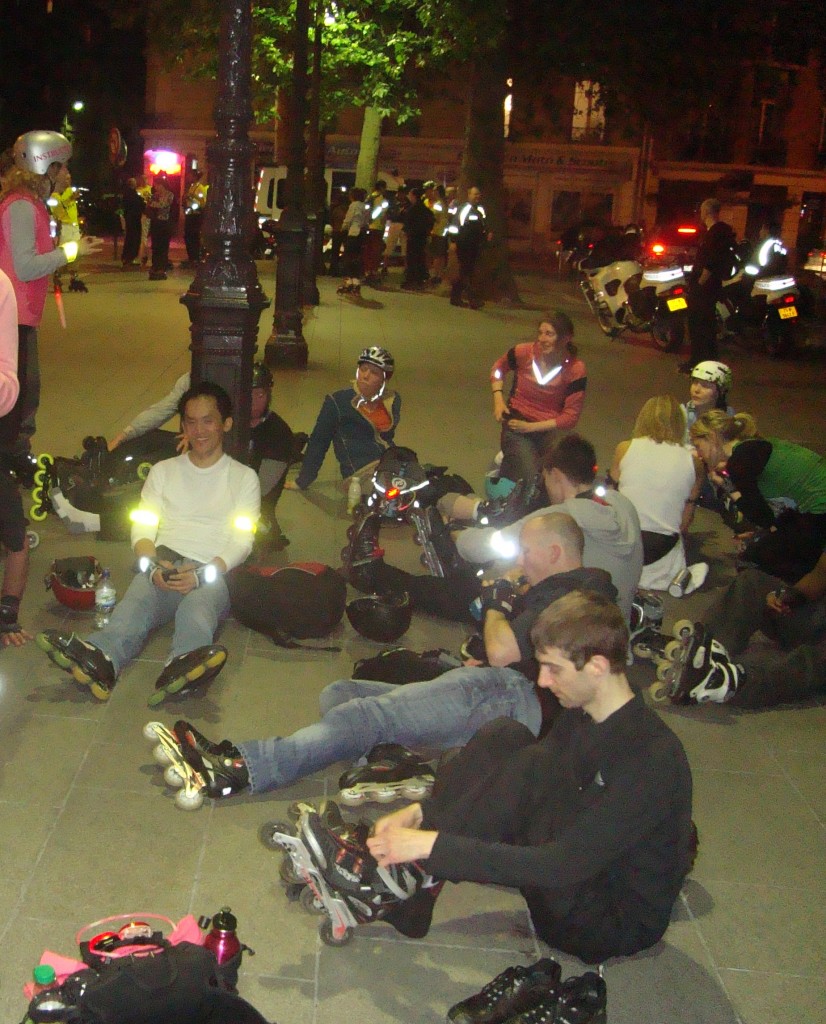 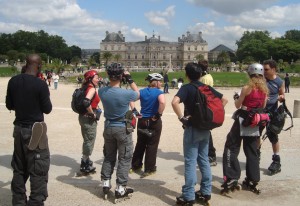 Saturday’s city tour began with suncream and a slow descent from Monparnasse hill down to the river via Jardim de Luxembourg, the Pantheon and the Sorbonne (where Andrew’s Parisian knowledge proved far superior to my own rudimentary notes but provided very interesting facts and information about the places we passed). 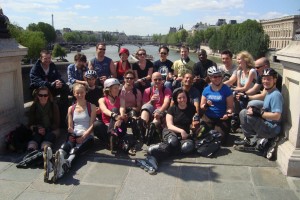 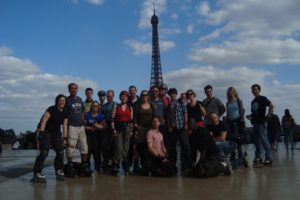 We weaved our way through the city, sometimes on pavements, sometimes on roads, stopping for photos, refreshments and then lunch in Place de Voges. We were joined there by Tony and his wife who was unable to do the trip due to a leg operation 3 weeks ago (and his home made ‘tipple’ was gone in seconds). After lunch we made our way to the Louvre via several river crossings and at the Louvre enjoyed the spectacle before heading to the Palais Royale for some impromptu 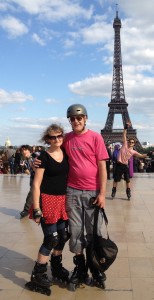 lessons on forwards crossovers (taking advantage of having a large space rather than the restrictive confines of Serpentine Road), backwards skating and finally a jumping

lesson which saw everyone eradicate their ‘windmill arms’ and successfully jump the space of an imaginary manhole cover. Not bad for a half hour ‘break’. We were lucky enough to have the help of local Friday night skate marshalls William and Lionel who had helped Louise and Hazel on Friday night and came with us on Saturday and took all our group photos.

With feet getting weary we headed along the river to end up at the Eiffel Tower for more photos, followed by a crippling hill up to Trocadero where we ended the tour and arranged to meet for dinner. Andrew’s excellent local knowledge again sorted us out with a great restaurant, apperitives, wonderful food and wine and competitive desert envy. The night ended with 15 of us in Andrew’s flat (smashing all previous records) devouring his alcohol collection and admiring his camel bone……(don’t ask). 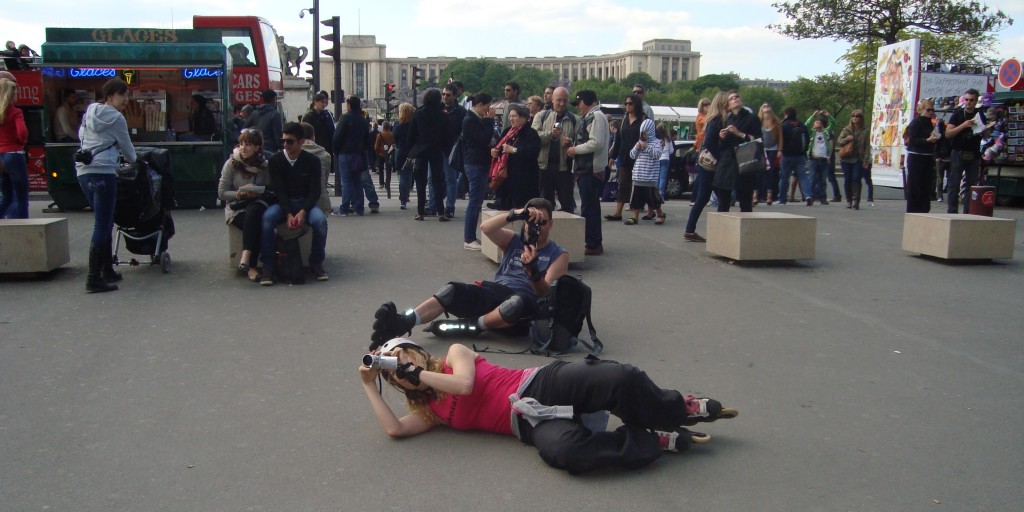 Sunday’s weather was even more sunny than Saturday and the Sunday Street skate was enormous due to the great weather, it stretched as far as the eye could see. This always makes me wish that the UK could generate such numbers on a street skate and create such a community, spectacle and positive attitude to skaters (from authorities, other road users and the city in general). It does give me hope. 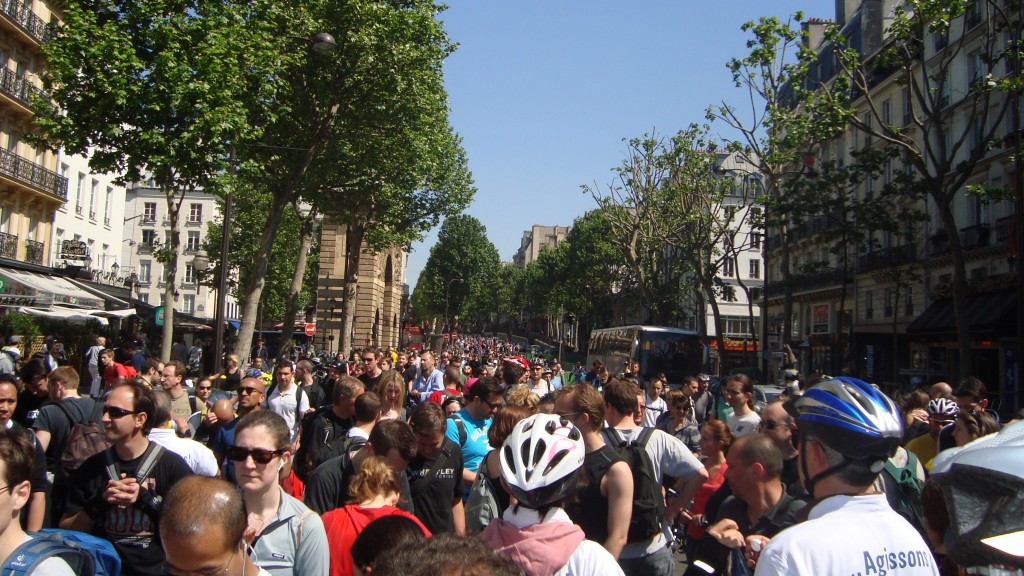 Personally I had a wonderful weekend and so enjoyed showing all the group as much of Paris as possible and I am so happy at how the group worked and how friendly and good humoured everyone was. Those that came now have a bunch of ‘skate mates’ they didn’t have before.

I look forward to seeing as many of them as possible on next year’s spring trip to Barcelona (May 2013). Watch this space……

>>> This is me on the tube home. Knackered but happy!