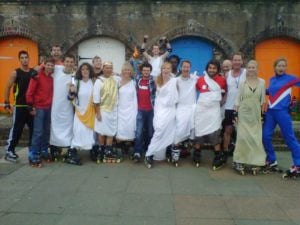 How great to see the core crew of Brighton Skaters out last night for the Olympic themed skate. After an unsuccessful 15 minutes of attempted toga tying in my bedroom, I gave up and found (again) my old GB Tracksuit (which in the last 23 years has only been worn by Sparky a few weeks ago at Le Mans). Everyone else’s toga’s were impressively constructed, due primarily to YouTube sources (which I did not consult obviously). Tony and Pam’s elegant robes suited them brilliantly. Hazel’s almost moth eaten Grecian dress was perfect for the occasion, although during our lesson before the skate I kept having to move the dress out of the way so I could see her skates.

We headed to Preston Park and then up a nasty big hill (rough pavement) and then into the velodrome. What bliss, a smooth, banked track with a stunning view over Brighton. 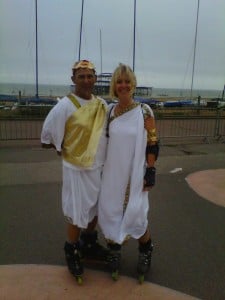 My first experience of that skate place, fantastic. Then I was delighted by the most lovely downhill I have experienced in a very very long time. It is long, straight, has no roads coming out at all (it runs along Preston Park) and it just carries on. I went backwards and experienced a slowly increasing velocity which did leave me wondering if I could transition that fast. The road surface had some bumps which added to T-stopping difficulty. But it really is a great skate road. I know some London skaters who would appreciate that road for it’s skill development……

Back through The Lanes, the people of Brighton  so often waving and smiling and cheering us on. I love early street skates in their first few years. There is an excitement to what’s going on, it’s new and different and people love to see the skate go by.

Great Western Road is one of the most wonderful slightly down hill super smooth roads, ideal for lazy backwards skating – and I’ve never seen it so devoid of buses. Bliss!

Thanks to all the crew for a great skate. I love skating in Brighton!